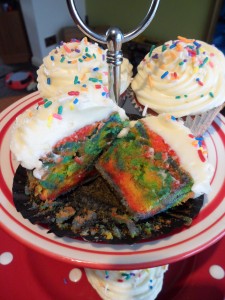 Somewhere over the Rainbow there’s some tasty cupcakes…

It’s very rare that I decide to sit still for long, Grant can vouch for this, but today I had to watch Wizard of Oz as it’s been years since I last saw it.  By ‘had to’ I genuinely mean had to as it’s our current school show which me and my mates Jo and Lucy are directing.  So what better way to be inspired by the film than to put together cupcakes that depict the essence of the film!  So I sat still for 2hrs to watch the film and then bustled off to the kitchen to concoct these (Somewhere over the) Rainbow Cupcakes.  Give them a try, it’s great fun! 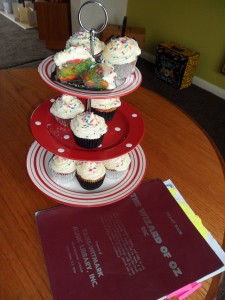 The Wonderful Cupcakes of Oz

The cakes are made by using the basic vanilla cupcakes from the Hummingbird Cake Days book, a purchase I highly recommend to any avid baker, or indeed anybody who struggles to get cakes to what they want them to

I then portioned the mixture into 6 bowls evenly 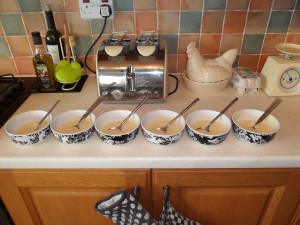 I then got some gel colours.  As i’ve mentioned in previous posts, I swear by these gels from Morrisons, but SugarFlair and similar are equally amazing and don’t need refrigerating whilst open.  Generally if you have the prime colours, you can mix them to make the other rainbow shades. 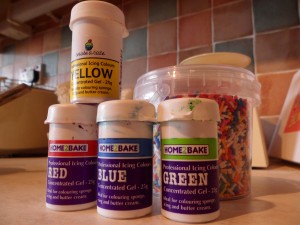 Create your own colours using the prime basics – red, blue and yellow!

I then added the colours to each bowl until I reached the desired shade.  Think bright here as the mixture will change as it bakes in terms of the intensity of the colour. 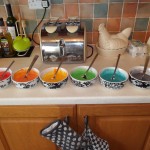 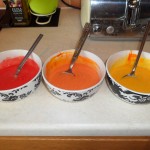 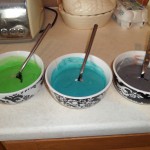 I lined a muffin tin with plain coloured cases…I used silver and black cases because I wanted the rainbow colours to POP when you unpeeled the cases.  I then layered up the mixture in order of colours (red through to purple) or you could just mix it up.  I worked form purple to red but the colours merged anyway. 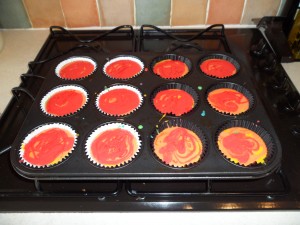 Pre-baked and layered up!

Once they’ve baked and cooled I topped with a cream cheese frosting: 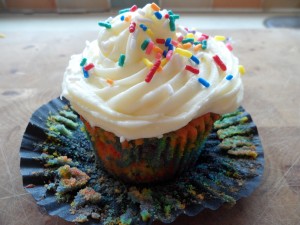 Frosted and sprinkled with rainbow love!! 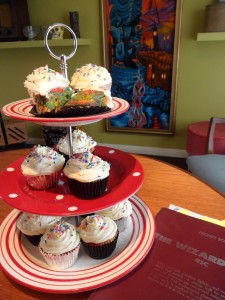 Enjoy with Munchkins and Flying Monkeys or just a cup of tea and friends!

Judy would be proud!